It’s that time of year again. Confusion is in the air! The stores are packed with jolly little pumpkin and candy cane costumes. Wicker cornucopia centerpieces dripping with blood are lined up on the shelves, waiting to adorn your festive table. I have no idea what all this is about. So, I did some research. 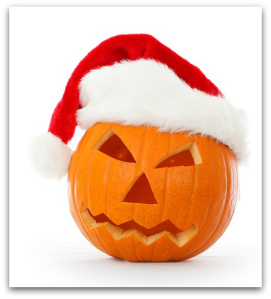 Regarding this “Halloween” thing (I read that on a poster somewhere. I think it was between some glittery corn husks and the purple and black-striped tree skirts.), legend has it there was a very old woman who liked to wear black, had an uncommonly warty nose, and carried a broom around—to sweep her neighbors’ front porches. She swept and she swept. Nobody noticed what a nice thing she was doing, so she became disgruntled and decided she wanted payment for her act of kindness. So, she knocked on their doors.

“Hello, I need you to come out and look at your porch,” she told them.

They looked, thanked her, and promptly denied her any donations for her good deed.

Well! she huffed to herself; and the more she thought about it, the more it rankled. She decided she would get even.

On every front porch she set a rotting pumpkin, and on one she placed a dead cat. (Her cat had died, and it seemed right to her, since that one neighbor had refused her quite meanly.) The neighbors, in return, decided to reward her for her presents. They baked pies for her. Made of pumpkin. (The rotting ones on the front porches went missing about that time.) The especially mean neighbor made odd-looking jelly candies for her. (Cat bones are wonderful for giving a jelly-like consistency to things, you know.)

For some reason the old woman became ill and died. The neighbors felt bad. They began to sweep their own front porches until it occurred to them to have their kids do it. The kids, knowing the origins of this chore, played terrible tricks on the neighbors, pretending to be the ghost of the old woman and leaving rotting pumpkins or carcasses and bones of animals. Some of the neighbors, still feeling guilty about the old woman, relented and gave the kids sweets as payment. Soon the children became bold enough to knock on doors dressed in their ghostly garb and announce, “Hello, we need you to come out and look at your porch. And if you don’t give us a treat, the ghost of the old lady will give you a terrible trick!”

The “Hello, we need” later merged to form, “Halloween,” the rest became the brief, “Trick or treat,” and that’s how it all began. At least, that’s the gist I came away with. I’m still looking for the thanksmas part.

Your thoughts are appreciated. No profanity please. Cancel reply