I’m reading The Warden by Anthony Trollope. As you know from previous hints, I’m very much delighted with 19th century writers’ methods. I crave the extensive introductions that grow the characters’ roots; it helps me understand them and empathize. I tend to linger over the insightful, sometimes humorous, comments from the author scattered throughout the story. Trollope satisfies my need to read about “real” personalities. And he doesn’t condemn his characters. No matter how proud, how cold or calculating, there is always a human element in these depictions of their nature.

He gives Eleanor, the warden’s daughter, a great deal of reflection when she takes up the campaign to save her father’s reputation from being ruined by the man she secretly loves. Trollope avers that hers is a disinterested act, yet he lets me see her through the eyes of one who knows the naivety and passion of youth. I smile at her expectation of gaining nothing, while I’m told she will end up with a pleasing confession from the man who returns her love. It’s gratifying to be told as a reader the writer’s decision not to use uninformed suspense to gain my interest in his tale. He woos by stroking a reader’s intellect and experience, while allowing his audience all the fervor of Eleanor’s determination to give up her most treasured wish for the sake of her father’s honor.

Trollope makes a vague reference while discussing Eleanor’s character. He notes she’s “not at all addicted to the Lydian school of romance: she by no means objected to her lover because he came in at the door under the name of Absolute, instead of pulling her out of a window under the name of Beverley…” Yes, Trollope does a wonderful job clarifying his meaning without explaining the allusion, but I want to know all the same. Who or what is Beverley? Being that my go-to tool for general questions is Google, I arrived at two quick guesses. 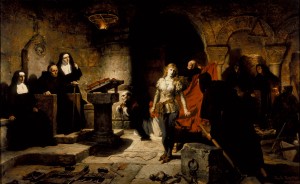 Guess 1: Beverley is derived from the nun in Sir Walter Scott’s Marmion, Constance de Beverly, who ends up being punished for breaking her vows by being walled up in an abbey.

Contention: ‘Beverly’ is spelled differently in Marmion, but that isn’t such a big deal. Not having access to an online library search engine, writers transposed and omitted letters in names all the time. Yet, the being walled up part is concerning because it presents no window to be pulled out of.

Guess 2: If Absolute is not an actual name, perhaps Beverley isn’t either. Beverley was the Parliament seat Trollope ran for but didn’t win. Could this be a jab at the tactics used in Beverley, noting that things were done in a less-than-straightforward way?

Contention: Trollope’s experience with the Beverley seat happened in 1868. He published The Warden in 1855. No doubt, Trollope had a prescient talent when it came to character sketching, but I don’t think he was psychic.

I’m sure there’s a simple explanation; I just don’t know what it is. ‘Beverley’ could mean anything! (Which means I don’t know Beverley about Beverley.) Is he alluding to a well-known person or place? I’m sure it was well-known for Trollope’s time, but I’m not as certain of its popularity today. Yet, here I am, connecting with the mind of a writer long gone who tosses out allusions to all sorts of things literary, historical, and meaningful to his time. Sometimes I look them up and am rewarded for my labor. Sometimes the detective in me has reached my quota for the day. That mysterious reference will have to remain a mystery.

Do you ever think about 21st century references and how confusing they could be to the 23rd century reader? Meme-making images and viral videos draw attention for a short time, and then we forget about them. What might have taken years to pass into oblivion takes a matter of days now. At least that’s how it seems. What are some references you’ve come across lately? Did you have to look them up, or did you already know what they were talking about?

2 thoughts on “Never Mind John Galt. Who is Beverley?”

Your thoughts are appreciated. No profanity please. Cancel reply