It’s Apples and Apricots Month! I made this cozy, healthy recipe for breakfast, replacing the sugar-free apricot jam it called for with puree canned apricots (adding a little agave nectar). I also replaced the apple juice with frozen apple juice concentrate to make up for the sweetness I took out by not including the sugar. 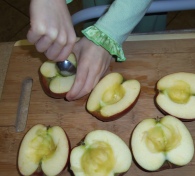 Making this was completely kid-friendly, but it doesn’t compete with Peanut Butter and Chocolate Puffs cereal. The consensus was that it was good, and that’s all. (One would’ve gone with ‘meh,’ but was persuaded to change her vote by the kinder votes of her siblings.)

My rating system is ever partial to foods that taste a little more real. So I gave it five stars, and my vote counts as ten. It’s a wonderful way to start a crisp January morning—warm and wholesome-tasting. And the aroma of cinnamon and apples that wafted through the house was incredible!