At fourteen, I learned I was allergic to MSG.

At fourteen, I developed a habit of making a package of ramen noodle soup after school. This continued through the summer, at which time a few red bumps sprung up along the upper back of one of my arms. Then the other arm developed bumps, and they multiplied. I would have become more alarmed if the bumps hadn’t slowly flattened and spread into red patches. I thought that meant the reaction was going away, but while it “healed,” it itched like mad. I took allergy medicine; it helped the itching, but the itching always returned. I tried various creams and soaks. Nothing seemed to make it go away. That summer I participated in a 2-hour test—a public test with one break—that required sitting still at a table in front of an audience, being read questions, and holding up the correct answer behind me to be graded. I was miserable.

What I originally assumed was chigger bites from being outside in the humid Florida woods quickly became obvious when the raised spots began developing on my stomach. It took some time to come up with the culprit: MSG. It was in the noodle seasoning packet I was eating in my soup every day, and it was in a variety of other foods and snacks I was getting at home and out and about.

The crazy thing is, when I learned I was sensitive to MSG, I did not want to give up my soup. I did not have an easy time of it. I craved Funyuns and Cheetos and Chicken-on-a-stick, even though I’d only eaten those occasionally. It was like my body was so addicted to the additive that the misery, the discomfort of constantly itching, didn’t matter. So, I cheated. I snuck foods here and there, only to discover that removing the MSG and returning to it gave me an immediate reaction. My throat began to swell, my ears swelled, my mouth swelled. My body erupted in hives. My stomach hurt and churned. I would be up all night, the toilet my companion. It was awful. And it was scary because there were times my throat would get so small and painful that it was all I could do to rattle in a breath, as I drooled, paralyzed because I couldn’t swallow. You might be thinking, “This girl needed an epi-pen!” I didn’t know anything about them, unfortunately, until my kids had their own allergic reactions to things. So, I just dealt with it.

Over the years, I’ve had quite a time trying to avoid MSG. But I would know when I’d eaten it. My stomach would burn and lurch; I’d have embarrassing episodes of scrambling for a bathroom—which led to anxiety about eating out, and that led to stressing in social situations that involved food. (People don’t understand why I get fixated on food choices. It’s a coping scar, I guess.)

After many years of coming up with alternatives for MSG-laden dishes, I can tolerate a small amount of “yeast extract” or “soy protein isolate,” or other pseudonyms that MSG likes to hide behind. I can taste it in my food now, so I can stop eating and drink a bunch of water before I develop the overwhelming symptoms.

Now that we know MSG is horrible for our bodies, I feel like the extreme reactions I experienced were actually very helpful in preparing me for a world of foods doused in MSG. It means what I cook is a reprieve from the detrimental effects of the fare at typical restaurants or at events. My kitchen can be the zone for healing the body, rather than inviting more destructive elements that create havoc on my family’s developing systems. At least, I hope that’s the case.

If you prefer not to eat MSG, you can make it much easier on your palate if you create tasty spice blends that take the place of the store-bought varieties. Here are a couple of my go-tos.

Magic Blend – A simple blend that works with about any meal. It’s my base substitute for meat seasoning powder, and it seasons roasted veggies sublimely. This 4-ingredient blend also flavors foods cooking on the stove… green beans, mushrooms, and broths.

In a recycled glass spice bottle, I measure out:

Crazy easy, right? You can add more or less salt & pepper, and you can sprinkle in spices that compliment specific foods. For example, I add smoked paprika to oven-roasted chicken or roasted asparagus spears, or I add ground turmeric for oven-roasted cauliflower. Even when I’ve already put in onions and garlic, I’ll sprinkle Magic Blend on to give the dish even more flavor. Yummy! 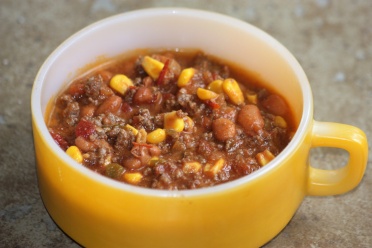 My second go-to spice blend was developed due to my love for all foods Mexican. Almost every Mexican-inspired recipe calls for taco seasoning mix, which has MSG. So, here’s my take:

I use 2-3 tablespoons of this with a 6 oz can of tomato sauce for taco meat. I use 3-4 tablespoons for taco soup. This is also a splendid dry rub for grilled chicken pieces.

I have an Italian spice blend, too, but that one’s pretty standard.

Having these on hand makes our food tasty and healthy. I found it easy to keep up with by jotting down the ingredients on a label and sticking it on the bottle. That way, the kids can refill it when it’s empty. Lastly, I’ve opted to get the organic spices now that I’m not spending money on store-bought mixes. Do you have any substitutes you like to use for MSG? Please share!