“And a river went out of Eden to water the garden; and from thence it was parted, and became into four heads. The name of the first is Pison: that is it which compasseth the whole land of Havilah, where there is gold; and the gold of the land is good: there is bdellium and the onyx stone. And the name of the second river is Gihon: the same is it that compasseth the whole land of Ethiopia. And the name of the third river is Hiddekel (Tigris): that is it which goeth toward the east of Assyria. And the fourth river is Euphrates.” – Genesis 2:10-14 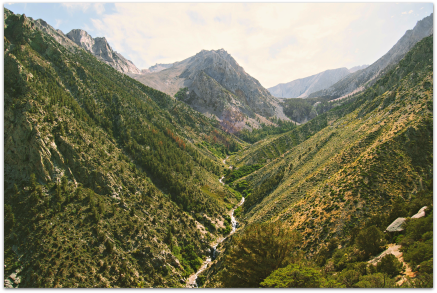 Was that a wordy set of directions? Did you skim over it? It doesn’t mean much to me because I don’t know these places. They aren’t giving me a picture in my mind of the setting, but I love that aside Moses gives them. “…Havilah, where there is gold; and the gold of the land is good: there is bdellium and the onyx stone.” Like any wealth-loving humans, you know their ears perked up at that. (“Oh, yeah! That Havilah!”)

Maybe the river Pison doesn’t relate to you, but what if I told you about a Native American girl living in the 1800s?

“Talula and her tribe never explored the Grand Canyon to the west or went beyond the Mississippi River to the east. One year, her tribe migrated as far as South Dakota, so she may have been near Mount Rushmore — you know, where our four presidents are inscribed in stone today. When she and her Chahta family returned south, they settled in the marshlands near the Gulf of Mexico.”

Now that I’ve given you U.S.-savvy readers some boundaries, is it easier to map it out in your mind’s eye? This is what Moses was doing. He was using current-day names and locations so the children of Israel would know the general area where the first man and woman lived. It wasn’t some legendary Atlantis.

Eden was a land in the Israelites’ memory, as well. We call it the Garden of Eden because that’s how Moses described where it was to the people; it was in the land of Eden. But it was just a garden on earth for Adam and Eve. It was only when they and their descendants began to walk the earth that places started getting named. And don’t we humans love to name things after ourselves? (Because of this, Oregon residents are probably still getting flack about that town, Boring.)

Recap: When setting your setting, remember readers need coordinates that are relevant to their interests.

Naming gets serious next time.